How To Use Your Camera As A Streaming Webcam

While a webcam is the easiest way to capture your face on video, professional streamers tend to take it a step further. Instead of a compact, USB-powered image sensor, pro’s often use camcorders and mirrorless cameras as their “webcam”. Sure, a webcam is easy to use, but they lack the crispness and depth of field that these machines and lenses spit out. So how exactly do you hook up a professional camera to your streaming set-up? We’ll lay the details out for you.

Before you haphazardly start buying expensive streaming gear, it might be good to consider what your streams exactly gain from this. What are you exactly investing in? If you’re just starting out on Twitch, these costs might be well above your pay grade, aside from it being lost on your viewership. Most viewers don’t care that much for the image quality on your face cam, especially when you’re still considered small-time, or mostly focus on gameplay anyway.

A solid webcam and proper lighting will do just fine for most streamers. Swapping that small sensor out for a professional camera can be seen as “the final step” to taking your production quality to the final level. Additionally, if you already own some of the expensive gear to begin with, this investment will get more accessible.

What do you need to stream with a professional camera?

An entire live streaming set-up doesn’t fall into your lap — even if you have some sponsorships. To get a professional camera to work in your broadcasting software, you’re going to need some specific gear. How you exactly hook it up, can still vary from set-up to set-up, but we’ll list the essentials down below.

Of course, you’re going to need a proper camera. Some streamers might claim you need “at least a higher-end Sony Alpha”, but truth be told: anything with a clean video output over HDMI (and/or USB-C) usually does the trick. Most modern photo cameras and video recorders offer this type of output by default.

As to be expected, more expensive sensors and lenses net you crispier images and additional flexibility. That’s nice to have, but the majority of viewers won’t notice these differences. Having native 4K output over HDMI nets you some future-proofing, but as of now, it’s mostly considered overkill. Your internet speed might not be able to sustain 4K live streaming, aside from the fact that most viewers won’t opt for anything larger than 1080p/60 streams. 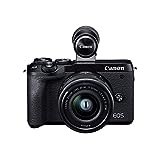 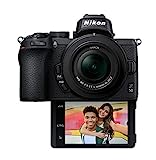 For general face cam purposes, medium-end DSLRs and their “kit lenses” work just fine. Most respectable photography brands, like Panasonic (Lumix), Canon, Nikon, Fujifilm, and Sony Alpha offer affordable mid-range cameras that would work for set-ups like these. A mirrorless camera is preferred over a traditional DSLR —  at least if you want to keep using that camera for photography as well.

As most cameras mainly work on proprietary batteries, you need a power source that can last entire streams. A battery will last you an hour or two at maximum, so having the official power adapter for continuous charge is a must.

Some video recorders might already come with their power adapter pre-packaged, while photography based kits usually sell them separately. Newer models of camera can sometimes be charged directly through USB-C, but do note that this often means the camera can’t be continuously charged while in use.

Depending on the type of camera, these adapters can turn out rather expensive. If you’re not yet locked into a certain brand or model, be sure to keep the additional costs of these adapters in mind when browsing for cameras.

If you want to capture HDMI output, you’ll need a capture card to turn the video signal into data your PC can stream. Any traditional HDMI capture card will do alright, but there are some great options specifically for this purpose. Most capture cards feature HDMI throughput — as they have console capturing in mind — while a select few take video input, without passing it through. These are preferred, as they are more affordable and easier to use. 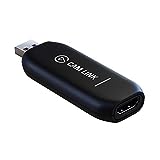 If you already have a solid capture card laying around, be sure to use that one. If that one is already in use for console streaming, or you don’t have a capture card to begin with, consider getting yourself one of these smaller capture cards, intended for this exact type of use. Streaming brand Elgato has made waves with their handy Cam Link 4K, offering up to 4K/30 output, but other brands offer reliable alternatives as well. 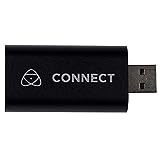 For example, if you’re aiming for 1080p/60 output over USB, the affordable Atomos Connect is worth considering too. Gamers might not recognize this brand name immediately, but Atomos is well-known in the professional videography market, offering some of the best camcorders out there. Your camera is safe with them, to say the least.

Side note: Is an additonal capture card really necessary?

Alternatively, some newer cameras can convert their own video over USB-C, to function as a webcam. You might need a firmware update for it to work, but brands like Sony, Canon, and Nikon have already rolled drivers like these out. This can be a neat stepping stone towards a more professional set-up, but it usually comes with its own downsides.

Over their USB interface, most cameras waste potential, as well as their capability to manually tweak the image settings. Even if the sensor is capable of capturing 4K, it might compress it to something sub-1080p through this port. It’s not the optimal solution. Additionally, you’ll still need that continuous power source for longer streams.

The type of HDMI cable depends on the type of camera you work with. But either way, your camera needs to connect to the capture card. Some brands opt for mini-HDMI, others go all-out with the traditional port. Action cameras, like some of the earlier GoPro models, sometimes feature micro-HDMI.

Gold-plated connectors aside, you mostly need reliable cable that plugs into both your camera, as well as your capture card. Just make sure you pick an HDMI cable that is compatible with your gear, while eye-balling the appropriate length that would fit your set-up(s). You don’t want something that limits the placement of your camera, or your desktop.

5. A tripod, or camera stand of some kind

As most DSLRs and other professional cameras don’t come with clamps for on-screen placement, you’ll need a tripod. Or at the very least, you’ll need a way for your camera to be fixed in place. It’s not rocket science, but it will cost you an additional couple of bucks.

Forget expensive “video heads” or automatic stabilizers — your camera mostly needs to stay in place. As professional cameras usually weigh a bit more than a simple webcam, you might need some heavy-duty stand, preferably with a desk clamp of some kind. If you’ve got the space on your desk, a cheap tripod meant for photography will do the trick easily.

Streaming brands like Elgato offer an entire ecosystem of modular arms and mounts for purposes like these, but basically any solid desk stand with a ball head will do just fine. As long as you make sure the weight of your gear doesn’t exceed what the stand can hold up, you’ll be golden.

How do I capture my camera in OBS or Xsplit?

As long as you opt for a broadly supported capture card — or have your proprietary “webcam software” updated — most broadcasting software will native recognize your camera output as a video source. At this point, your DSLR or professional camera has basically been turned into an overpowered webcam. Just how we like it. They do, however, require a bit of extra set-up to keep working properly.

First of all, you have to get that video output as “clean” as possible. Make sure you tweak your camera to not spit out any HUD-like details (i.e. viewfinder information and/or current image settings) over HDMI, while opting for the right output for your stream. Over HDMI, most modern cameras can spit out at least 1080p/60, which is great for gameplay streaming.

Besides that, you’ll probably want to disable any automatic battery savers that might turn the camera off mid-use. As it’s not actively recording in-body, some cameras might think they’re idle, and shut down shortly after. Turn these options off, and learn yourself to shut down your camera manually, immediately after your stream has gone offline.

Want to retain the life expectancy of your viewfinder? Make sure to switch off any screens when an HDMI cable is connected. Most professional cameras come with features like these baked in, as videographers rely on them too, when filming with separate camcorders.

With the right HDMI and power-saving settings, you’re all good to go. Your camera is now an incredibly versatile piece of streaming gear.

How do I make my face cam look professional?

Additionally, you’ll have to make sure the image quality is as crisp as you want it to be. Traditional webcams usually feature autofocus and automatic exposure, while you’ll have to opt for settings like these on your professional sensor manually. Sounds like a hassle, but this is the freedom you get out of a set-up like this.

Getting quick-and-easy quality can be done through turning the camera into the most automatic of modes. This will still beat most top tier webcams in pure image quality, but the fun of these cameras lies within that additional tweakability. By experimenting with settings like shutter speeds, ISO settings, and different lenses and filters, you can create a face cam that looks incredibly professional.

There’s no “lifehack” for camera settings that will always look amazing, though. It all depends on your set-up, as well as the gear you’re working with. Be sure to experiment with the settings in your sensor and different lighting circumstances, to net yourself the best picture quality.

Alternatively, you can turn this process into a stream itself. This way, your audience can give their two cents on your new “webcam”, while ever so slightly steering how your streams will look in the future. Either way, it’ll definitely perform better than most traditional webcams.

You get the picture?

There, you’re all caught up on how to live stream with professional cameras. And while sure, webcams still take the crown on ease-of-use, but these sensors offer better picture quality and more flexibility than ever before. They can be the final touch to lift your live streaming to that next level, and now you understand how to get there.

Is there anything you feel is still left unclear to you? Or do you want to add on our article with a great tip of your own? Feel free to let us know, by dropping your two cents in the comments down below.

We’re here to help you figure out how to improve your streaming, while other streamers might benefit from your perspective too. Don’t be shy! That makes for a great pro-tip when streaming too, by the way.

Microsoft is bringing DirectStorage and Auto HDR to Windows 11

GPU prices on eBay seem to be going down