As of today, most third party controllers for PlayStation consoles try to substitute for a DualShock 4 — the standard controller that comes with any PlayStation 4. Usually, all of these will work on PlayStation 5 as well, but they won’t mirror the unique features of the DualSense controller all that much. Sony keeps their adaptive triggers and proprietary haptic vibration to themselves. At least, that’s the case for now. 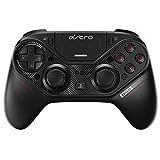 Our recommendations will work fine on PlayStation 4, and often PlayStation 5 — just don’t expect these triggers to work the same magic as the DualSense does. The same goes for motion controls or an integrated speakers: that too, often gets cut from the equation. With that being said, let’s list some great alternatives for DualShock 4.

In recent years, Nacon has made waves in the market of aftermarket PlayStation controllers. Their Revolution line does what Sony didn’t: an “Elite-like” take on the DualShock 4. The Nacon Revolution Unlimited Pro Controller is the most luxurious in that range, loaded with additional functionality.

The Revolution Unlimited expands on what the Revolution Pro 3 — listed further down below — did well. This means customizable joystick dead zones, trigger actuation curves, optional handle weights, four additional back buttons, and on-board profile storage. This all comes on top of common DualShock 4 features, like a fully operational touch pad, headset jack and motion control. 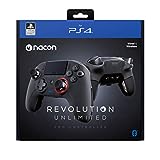 The Unlimited adds Elite-like features, like different thumb pads and variable stick widths.The joysticks themselves are already rather precise, but offer more physical flexibility in this package. The Revolution line does, however, cut back on the built-in speaker and integrated light bar. Those are rarely missed in competitive controllers, but it needs to be said.

In contrast to other gamepads in Nacon’s selection, the Revolution Unlimited can be used wirelessly through a USB dongle, as well as Bluetooth. Through these connections, the controller is highly compatible on PC, and many smart devices.

For the fastest results, the USB-C connection should be your go-to. This port is also used to charge the integrated battery for wireless use.

Most known for their high-end gaming headset, ASTRO Gaming also got into the controller game. With their C40 TR Controller, ASTRO underlined their premium approach. Not only is this wireless controller geared towards competitive performance — it runs on 5 ms latency over its USB dongle — it’s also highly tweakable.

The standard C40 package already comes with easily interchanged joysticks, but also features modular components. The entire joysticks and D-pad module themselves can be replaced, as well as the face plate. This means you can keep the controller over prolonged times, but can exchange different modules when needed. It also beats the “which controller lay-out is better” debate, as the C40 TR can be used in offset and parallel orientation.

Aside from its modular build, the C40 TR comes with handy trigger stops, and two additional back buttons. Both prove exceptionally reliable when compared to many other options. The overall build quality might explain the heavyweight price tag ASTRO slapped on.

The ASTRO Gaming C40 TR is, above all, a highly competitive controller. It skips integrated speakers and light bar functionality, but outperforms your DualShock 4 in almost all other facets, most notably its durability.

Coming mostly from Xbox-branded controllers, the Razer Raiju marks a shift towards DualShock 4 alternatives too. The Raiju is slightly “chunkier” than its older Wolverine brother, but features roughly the same approach to competitive controllers. That mostly relates to an extremely durable build quality, with some of the most clicky controller buttons out there.

Not unlike the Wolverine, the Raiju features two additional back paddles, as well as two extra bumpers on top. The two triggers come with the same optional trigger stops too. The tactile advantage of most buttons is defined by Razer’s many proprietary “Mecha” switches, which generate a pleasant click when pressed. It’s something you’ll likely grow fond of in a matter of hours.

The Raiju connects over a dedicated USB cable, but can be used wireless over Bluetooth as well. It’s relatively plug-and-play with a PlayStation 4, but will also be recognized by PC and smart devices. There’s a Bluetooth app to easily remap the extra buttons for Android and iOS.

With the Razer Raiju targeting mostly competitive gamers, the integrated speaker, motion controls, and light bar have been severed from the package. The Raiju does feature a fully functional touch bar, as well as a headphone jack on the bottom part.

Moving a bit further down, price-wise, there’s no escaping the Nacon Revolution Pro Controller 3. This third generation in its range offers solid performance and highly tweakable settings, without immediately breaking the bank. Expenses were spared on the wireless capabilities, so do note that this one is bound to its USB-C connectivity.

The Revolution Pro 3 features four additional back buttons, interchangeable weights in its handles, and a knack for tweaking settings. Through its PC software, you can easily set different behaviour for triggers and joysticks, as well as remapping buttons. Each of the three modes (Default, Pro, and PC) can store four different profiles on the controller itself.

Apart from some minor quality control issues, Nacon makes a good case with the third Revolution. It’s still that “Xbox Elite-like” option for PlayStation, but doesn’t dip into the upper echelon of price ranges. The headset jack and some minute details might be subpar to premium choices, but considering the price, it’s quite a package either way.

Diving fully into the lower budget range of DualShock 4 alternatives, Nacon skimmed down their own controllers just a bit further. The Nacon Compact Controller is basically a hard-wired default controller, that’s been made ever so slightly more durable.

As is the case with the more luxurious Revolution range, Nacon’s Compact lacks integrated speakers, a light bar and motion controls. It does come with a headset jack, two vibration motors, and fully functional touch bar, though. The soft-touch plastic used, still give the Compact a somewhat premium feel.

Nacon being Nacon, the two joysticks — this time placed after PlayStation’s preference — might prove smoother than your regular DualShock 4. It’s a matter of taste, but the bigger turn radius and lighter sticks could be beneficial to some twitchy shooter fanatics.

Even though the model itself is a bit older, the Japanese Hori brand can be trusted for their quality. Coming from a legacy in high-end arcade sticks, these guys know how to make trusty peripherals. In an attempt to target avid FPS enjoyers, the HoriPad FPS Plus was made. 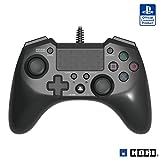 The HoriPad FPS Plus is a hard-wired controller for PlayStation 5, PlayStation 4, and even PlayStation 3, with built-in benefits for shooters. The analog triggers have made way for quick buttons, while a “Target Button” on the back let’s you swiftly cycle through three stages of sensitivity. Additionally, the HoriPad comes with a remappable Turbo button, that can rapidly output other buttons from the controller.

With its heightened focus on shooters, the HoriPad skims on other common features. The iconic touch pad is fully functional, but Hori cut down a headphone port, the light bar, motion controls, and even the vibration. Considering the price and target audience, it’s not all that bad.

Did you find the controller you’re looking for?

And with that, we close our list of DualShock 4 alternatives. It’s quite a lot of different shapes and features, but the better you can find something that goes great with your gaming experience.  No matter your preference or price range, there’s likely enough to get you browsing with efficiency.

Do you feel like we might have missed a great addition to our list? Or perhaps you would like to chime in with your own experiences with some of these? Either way: we would love to hear from you, in the comments down below. We would love to answer some questions, or expand upon our already diverse recommendations.