Desktop gaming has long served as the best option for those who love graphics, speed, and precise customizability. But still, desktop systems have always lacked one major feature that laptops and consoles implement by default: wireless connectivity. The times are a changing though, as Wi-Fi adapters have greatly increased in availability, as well as quality. These are some of the best external and internal adapters to consider…

Sure, for optimal speed and stability, corded connections are always favored. However, as manufacturers develop increasingly well built Wi-Fi adapters, these little devices can open up your existing system to extra flexibility. With just the addition of one tiny gadget — over PCIe or USB — you can open up new connections for your PC. Not only are you able to use your system in places where proper cabling is scarce, it’s also easier to stream your gaming to smart televisions or other wireless devices.

As these adapters grow stronger and more stable, the days of wireless lag spikes are left behind. No matter how you plug them into your system, there is most likely something out there that suits your network needs. Does your router support Wi-Fi 6 but your PC doesn’t? Don’t worry: we even got some great plug-and-play adapters for that.

We’ve created this guide to walk you through the best wireless adapters of 2021. Whether it’s a USB dongle or an internal desktop card, you’ll find our list has a card for everyone, while focusing on what matters most to you: gaming. 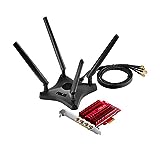 Our list isn’t definitive in any way; it’s merely meant to introduce you to some great options on the market. If you want to know more about what makes a wireless adapter great, and what kind of features to look for, check out our article on everything you need to know about Wi-Fi adapters. Over there, we’ll answer frequently asked questions about the technology in general, but also help you optimize your home network at large.

These are some of the best Wi-Fi adapters in 2021

Under their PCE range, ASUS has been offering some stellar internal wireless adapter for desktop systems. One of their latest additions to the series, is AX3000 generation, which can be bought in multiple flavors. The most premium one, features two externally placed antennae, as well as a slick heatsink. You’ll have to sacrifice a PCIe slot for it, but it grants your existing system access to Wi-Fi 6 (though the 802.11ax protocol), as well as Bluetooth 5.0. 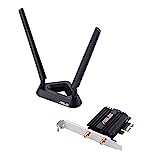 ASUS has made adapters with greater capabilities in range (one of which is listed down below), but their PCE-AX58BT offers a neat all-in-one package. The internal card features its own M.2 slot for networking cards, granting the product some further future-proofing. On the other hand, out-of-the-box the card already offers speeds up to 2402 Mbps over 5 GHz, as well as OFDMA and MU-MIMO to ensure stability in crowded networks. If you’ve placed your antennae correctly, this rivals a cabled connection.

The Bluetooth 5.0 functions as a neat little addition, as most gaming motherboards don’t come equipped with short-range wireless connectivity. Sure, you wouldn’t want to play any speedy shooters with Bluetooth mice, but it’s nice to have extended flexibility when it comes to speakers or syncing smart devices. Consider it some extra luxury on an already great internal card. 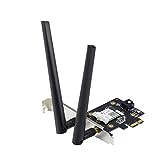 If the price is a little too steep and you don’t feel like placing your antennae promptly in sight, the alternative version might be more up to your taste. By taking away the heatsink and freestanding antennae extender, ASUS can sell their PCE-AX58BT for just a tad bit less. Without the heatsink your system might run just a little bit warmer, but some wireless connectivity probably won’t melt away your performance that quick.

ASUS offers all the top-notch Wi-Fi range with their trusty PCE-AC88 internal card. It might not come with support for Wi-Fi 6, but it’s still one of the best contenders out there if your desktop is positioned between a rock and hard place. Meanwhile, the fifth generation 802.11ac chipset can still deliver dual-band speeds up to 2167 Mbps. That’s no joke when it comes to plug-in bandwith.

With four dedicated antennae, the ASUS PCE-88 offers a range you’ll love and speeds that rival high-quality corded connections. In short, this won’t be your bottleneck if you ever experience lag issues. The PCE-88 also doubles as a fantastic extender because its connection is powerful enough to take in Wi-Fi, as well as connect with other devices without a hiccup.

All the trimmings of modern wireless technology are offered with the PCE-AC88. From MU-MIMO to beamforming, it’s got it all. The antennae setup also turns out quite effective, while proving more than powerful. Simply place the magnetic extension piece where you desire, and it’ll do the rest. You can stick it to your PC itself, without damaging any crucial hardware due to magnetic interference. Just don’t stick it on your screen or credit card, for that matter.

There aren’t many cons to the PCE-88 — except maybe from missing out on Wi-Fi 6. It’s one of the more expensive models out there, but still quite reasonable, considering it range. Wi-Fi adapters aren’t very expensive to begin with, but you could consider this “high-end”.

TP-Link’s Archer range is your standard, two-antennae internal wireless card. Where it stands out from the competition, is the quality of components at their price range. For example, the quite affordable TX50E is running AX3000 protocols, granting you Wi-Fi 6 compatibility and MU-MIMO support in a pinch. And yes, through Wi-Fi 6, your in-game latency can be decreased up to four times.

The two antennae give you some range, but it will probably not reach the furthest edges of your domain. As long as the determined desktop isn’t too far from your router, this should easily suffice. Even with a more crowded wireless network, this adapter can still reach internet speeds up to 2402 Mbps over the 5 GHz band. Over the wider 2.4 GHz, you’ll net about 574 Mbps.

As a neat little addition, the TX50E also comes with Bluetooth 5.0 compatibility baked in, granting you extra wireless connectivity. Although most gamers won’t prefer this connection for their high-grade gear, it’s always nice to hook up an extra controller or a Bluetooth speaker from time to time. Consider the still quite affordable price, TP-Link delivers a neat all-in-one wireless adapter for your leftover PCIe slot.

Coming in as one of the bulkiest USB adapters on the market, it’s TRENDnet’s TEW-809UB. This device has been shaped more like a router, offering a bigger range than most plug-and-play Wi-Fi adapters. With four dedicated and fully detachable antennae, and a decently weighted stand, you can rely on the TEW-809UB to be your go-to mobile Wi-Fi solution. It’ll top out at 1300 Mbps over 5 GHz.

Technology-wise, the TEW-809UB comes with targetted beamforming, but lacks any form of MU-MIMO support. Again, it’s mostly the reliable range that you’re paying for, not necessarily the most reliable connection to crowded networks.

As TRENDnet is coming from a business angle, their products usually aren’t very Mac-friendly. The TEW-809UB is compatible with most OSX devices, but multiple Mac users have reported inconsistencies in their connection through the device. Not an issue to most PC gamers, but it’s worth noting.

If you’re looking for brands with wider compatibility and more renown in wireless connections, Netgear is where it’s at. Although Netgear diverted most of their attention to routers and mesh W-Fi, their older Nighthawk A7000 wireless adapter still packs quite a punch. Through USB 3.0 you can either directly pop this bad boy into any Windows or Mac system, or through a separate, magnetic cradle. The small device is capable of Wi-Fi speeds up to 1300 Mbps over 5 GHz.

Although Netgear’s Nighthawk brand has been transformed into their gaming subsidiary, the Nighthawk AC1900 doesn’t lower ping or grant gaming sessions priority whatsoever. Still, through 3×4 MIMO support and Beamforming+, it can still get you gaming and streaming alright. As long as the adapter and internal antenna isn’t horribly placed, the Nighthawk A7000 still nets you a quick upgrade to wireless connectivity.

Apart from missing out on Wi-Fi 6, this adapter is still quite the top-performer. It’s easily one of our most plug-and-play picks, without losing too much wiggle room in range or modern technologies. If this slim adapter is ever on a big sale — due to it being end-of-line for Netgear — you might just want to pick it up anyway.

EDUP is coming in with the budget pick: a USB 2.0 driven AC600 Wi-Fi adapter, offering quick and easy internet access. Zero frills and just one antenna, it doesn’t get more simplified than this. It’s still dual-band (like all our picks are), but tops out at 433 Mbps over 5 GHz connections. It’ll get you connected, just don’t put too much pressure on this one. 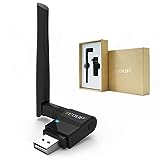 If anything, consider USB adapters like these an easy way to make wired machine somewhat wireless. As long as they’re never too far away from a reliable router, this singular antenna will hold up. By missing out on any kind of beamforming or MU-MIMO support, these little devices don’t do well under pressure. It’s good enough for a file transfer and some light browsing, but don’t even think about downloading big patches or playing games on crowded networks.

It looks more futuristic than it actually is, but it’s a looker, at least. With their DWA-192, D-Link has made neat little Wi-Fi adapter over USB 3.0, that still holds up to this day. It features speeds up to 1300 Mbps on 5 GHz bands, while having 3 x 3 antennae built-in that use Advanced AC SmartBeam — a sort of forerunner to beamforming.

The DWA-192 might not blow you away with its speed, but this tiny Death Star certainly outperforms most internal Wi-Fi antennae found in laptops. If you need something that can send signals through a concrete wall or too, this Imperial gadget might just do the trick. If anything, it’s a perfect companion when travelling, just don’t throw it into your jeu de boules bag.

Due to its age, stock on these bad boys might be lower than expected. If prices surge, steer clear from this unique device, and opt for one of the adapters above. If you can find “the orb” for a couple of tens, the DWA-192 and its reliability might be well worth the cost.

Get connected with us, and fellow gamers!

And with that cute outlier, we close our list of recommendations on decent Wi-Fi adapters. Not all of them will rival your good old ethernet cable, but these products help you get connected with less wiring. They’re perfect for getting olders systems on more reliable (or just newer) Wi-Fi waves, without immediately burning holes in your wallet. We hope you’ve found something that suits your specific needs.

Still unsure on what to get — or why? Don’t be shy, and let us know. We would be happy to help you understand certain connectivity topics, as well as steer you into the right direction for your next purchase. We’re always down to keep talking Wi-Fi and adapters, down below in the comments.

Everything You Need To Know About Wi-Fi Adapters