Interesting things are happening in the gaming laptop world. They don’t have to be these bulky monstrosities any more, they don’t have to set you back thousands of dollars. They still can, and many still do, but there’s more options than ever before. That makes picking the perfect one all the more difficult, but fear not, because we’re here to help. These are the best gaming laptops you can buy in 2020.

You may also want to think about a new gaming mouse, and maybe some headphones.

We could start with a list of all the things you have to keep in mind when buying a gaming laptop, but that would probably break the entire internet (but don’t worry, a buying guide is coming up soon). Old faithfuls like memory, GPU and screen refresh rates never fail to stay important, but the ever-changing world of gaming laptops also opens up to new techniques like ray-tracing and gorgeous designs. Whereas most of the laptops featured in this list are rather pricy, we’ve also tried to keep the slightly more casual gamer in mind, with somewhat affordable beasts that still manage to get you to go ultra settings. Time to dive right in!

The Razer Blade 15 is the quintessence of new-style gaming laptops. It just doesn’t really look like a gaming laptop - if you forget about the backlit keyboard and the slightly chunky area below it. It comes in a wide array of setups: a 9th or 10th generation i7, graphics cards ranging from the GTX 1660 Ti to the RTX 2070 Max-Q powered 4K OLED version. Even the most powerful ones are still fairly priced, it’s highly customizable and ray-tracing is supported on the higher specced iterations. It still ain’t cheap, but you’re still getting a lot of bang for all those bucks.

The Asus ROG Zephyrus G14 is another example of a normal-ish looking laptop that’s still dedicated to gaming. Republic Of Gamers products often tend to look a bit far-fetched, but the Zephyrus is a classy-looking laptop that packs a whole lot of power under its hood. This laptop doesn’t excel in any particular fields, but it’s the combination of those almost-perfect specs that makes it into one of the best gaming laptops you can buy. It’s powerful, it’s beautiful, it has some mad processing skills, and yet it’s still lightweight, and it’s quite the looker. The Zephyrus is the hardware equivalent of trying to platinum your game: don’t try to be the best at anything, just try to be good at everything.

If you like thin, you’ll love the Alienware M15. It’s Alienware’s thinnest gaming notebook ever, but don’t let that fool you into thinking you’re losing out on either looks or power. It has this gamey feel over it, but not too much. The M15 triumphs in places you usually don’t think about until it starts to affect your gameplay: its massive battery, its beautiful airflow, its cooling system. If you have three times the money laying around, you could opt for the M17, but it you want to keep it simple, the M15 will do for whichever game you’re going to play.

The MSI GS65 Stealth comes with a large family. Our pick is clearly the middle child: not as crazy and ungovernable as its bigger brothers, not as cute and adorable as its little sisters. The GS65 isn’t dubbed Stealth for no reason: it looks like it could be used on black ops missions all over the world, and no one would be surprised if it was. You could technically spend four thousand dollars on the mad-hatter version, or save a few hundred bucks on your graphics card, but as far as averaging things out is concerned, this is the one you’re going to want to be going for. 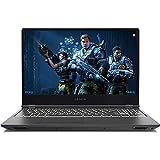 The Lenovo Legion Y540 is a sleek gaming laptop that doesn’t scream for attention, even though it deserves to get some. It come with a previous-gen i7, either 16GB or 32GB or RAM and a 512GB or 1TB SSD, with an optional 1/2TB HDD to accompany it if you want it to. The lower screen bezel is somewhat oversized and the chunky coolers at the bottom aren’t necessarily classy, but overall, this is a good catch in this particular price range. And speaking of price range: it’s currently 600 bucks off, so if you’re ever getting it, now is the time.

The Acer Predator Triton 500 brings back memories of what gaming laptops used to look like. Its cut-off corners and cyberpunky backlights leave you no other choice than to admit you bought it just to play games on, but isn’t that just really cool? The 32GB RAM version is slightly more expensive, especially with the 1TB SSD it’s home to, and the battery isn’t something you brag about, but other than that, the Predator is a true gaming laptop that just breathes the lifestyle.

The Dell G7 17 is, let’s face it, a gorgeous piece of hardware. Its layered case both helps with cooling its insides down, and looks really cool doing it. It won’t go over 16GB RAM and a 512GB SSD, but that’s still plenty to work with. There is 2020 version, but it’s currently out of stock. Even so, this is yet another laptop that hit that $1500 sweet spot just right.

One brief look at this laptop and its name makes all the sense in the world: it looks like it was developed in a secret underground Area 51 facility. It’s massive, it’s thick, and unlike every other gaming laptop ever, it isn’t even black (well, this version isn’t). Its gigantic backside looks like the business end of a spaceship, and it’s so powerful we expect it can fly like one, too. You’re going to have a hard time finding a brandnew one, and even the refurbished versions are expensive, but since this is a list of the best gaming laptops out there, the Alienware Area 51m just has to be on it. 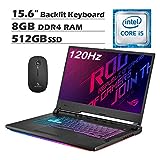 Another beauty by Republic of Gamers, the Asus ROG Strix GL502 is the most wallet-friendly gaming laptop on this list. Sure, you can ramp it up if you want to pay about twice the price, but you can get the basic version relatively cheaply. It will still look neat, and you’ll have 8GB of RAM and a 512GB SSD to play most games on the highest possible settings. It’s not the monstrosity you’ll find in some of the other laptops, but this barking piece of hardware can still bite pretty darn hard.

There’s always one, and that one’s the HP Omen 17t. It’s slightly obese. It has crooked edges. The screen looks like it’s about to come off. It looks like a true gaming laptop, and that’s because it is. The Omen 17t is a graphics wonder, with either a Geforce RTX 2070 or 2080. All in all, it’s a bit silly, and that’s such a beautiful throwback to what gaming laptops used to be, we just had to mention it.