PS4, Xbox or Nintendo Switch: The Best Game Consoles of 2020

PC gaming is amazing, but there are a whole lot of casual gamers out there who don’t need all these fancy specs and hardware. If you’re one of them, you can choose to pay hundreds and hundreds of dollars for a basic gaming PC, or turn to a console. Whether you’re planning on buying a PlayStation 4, Xbox One or a Nintendo Switch, we’re here to help you. Choose wisely!

If you’re not desperate for perfection and just want a nice gaming experience that won’t set you back too much, a game console is your best option. For much less cash than you’d pay for a high-spec pc or laptop, you can get a near-flawless experience with a dedicated machine that suits your needs.

But there are quite a few to choose from. Sony has built a ridiculously popular line of PlayStation hardware, Microsoft is nibbling away marketshare with its Xbox models and Nintendo has a long history of both handheld and stationary consoles. So, which one is best for you?

That all depends on your wishes. Do you use public transport a lot and are you looking for a way to spend those boring commuting hours? Get a Nintendo Switch. Do you want close-to-PC-like graphics and power? Then the Xbox One X is your go-to console. Looking to play the most popular games on the most popular gaming device ever? Go PS4. Or keep on reading to figure out which one is truly the best gaming console for you.

The best of the best

Why are we starting with this one? That’s easy: because it’s the most powerful console to date, and it will remain to be until a new generation is coming out later in 2020. Sure, Sony’s PS4 Pro is pretty similar, has more or less the same specs, does some kind of 4K and is cheaper, but there’s just nothing like Microsoft’s gaming box.

With native 4K and some hugely powerful hardware, gaming on an Xbox One X comes awfully close to playing videogames on your average gaming pc – and you won’t have to pay nearly as much. Until its successor (Xbox Series X) hits the stores later in 2020, the One X is the meanest piece of dedicated gaming hardware you’ll be able to find.

Also the best of the best

Might as well have been #1. Seriously, we don’t care.

Remember, this is not an Xbox-vs-PlayStation beef, we’re just trying to see which ones suit a set of specific wishes best. Sony has built a great console, not as powerful as its main competitor has, but try to find a game that doesn’t run as smoothly as can be on the PS4 Pro. Controller-wise, Sony has done great in creating the touchpad, even though many still prefer the Xbox layout. PlayStation’s biggest pro is the wide array of exclusives, games that solely (at least temporarily) come out for that specific platform. No way you’re going to be able to play Spider-Man on your Xbox…

Long story short: whether you buy the Xbox One of PlayStation 4 Pro depends on how important you deem details like controller layout, platform and exclusives. Just pick one, we really don’t care!

Often on the road? Just dock and undock your entire console.

How beautifully surprised we were when Nintendo announced its new hybrid console, back in 2017. A handheld that played all your favorite Nintendo games, with controllers that could be used for any ridiculous purpose one could possibly imagine, and that was dockable so you could play in high-def on your tv screen too? Sign us up!

Nintendo hasn’t let us down since. Some amazing games have seen the light since, with The Legend Of Zelda: Breath Of The Wild as the barely disputed user favorite. Now even older PC and PlayStation games are being ported towards the Switch, there’s a lot of good reasons for the casual gamer to just leave those monster consoles lying in the stores, and pick this one up instead. And really, why wouldn’t they?! 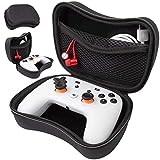 High-def gaming on every screen

Fine, we’re cheating a bit. Google Stadia isn’t a console, but it is a casual gaming platform that works with controllers so we say it counts. Stadia has had a slow-ish start, with only a few handsful of AAA games available at launch, but we’re definitely going to give it some time.

The biggest reason to get Stadia is that you don’t need a console anymore. You can play a game on every teenie tiny screen you have lying around catching dust (although we can really recommend using the 4K features on your OLED tv). All you need is a proper internet connection, and you’re good to go. And knowing Google, the list of playable games will only get longer and longer.

Are you the kind of gamer that can prey on your own backlog for years to come? Who’s still fooling around in GTA V or waiting to finish the first Red Dead before starting on the new one? We hear ya! If this sounds like you, you’re not going to be needing a monster console for at least another while. And why pay the extra buck when you’re not going to use it? Just get yourself a PlayStation 4 Slim.

A less powerful, stripped down version of the One X, the Xbox One S is your cheapest option to play the latest Xbox games in close-to-perfect quality. It’s not as bulky as its bigger brother, but the One S does support 4K and HDR. With the Xbox Series X on its way, it might be smart to wait for a few more months, but if you’re dying to start gaming in awesome quality for a relatively low price, the Xbox One S is a perfect option.

It doesn’t dock, but it’s still a lot of fun to play with

Nintendo also came up with a stripped down version of their console, called the Switch Lite. Technically, it isn’t a Switch, because it’s not dockable like its bigger counterpart. Even in handheld mode, though, it’s a pretty neat thing to play with. Most Switch games can be played on the Lite, only a handful of docked-only and certain fitness games are out of your league. It’s a fair bit cheaper than the normal Switch, too.

Xbox Series X: release date, specs, and everything we know

PlayStation 5: release date, specs, and everything we know

Shadow: a remote game PC to access on your device of choice