Apart from cooling your CPU and GPU, you want the rest of your gaming PC to be cool overall. And while yes, your case might already come with some fans — it might just not be enough. To get your system running at optimal temperatures, consider our recommendations to be among the best case fans of today.

Our list isn’t definitively picking one product over another. It’s still mostly up to preference whether you like a good case fan or not. Instead, we offer a quick look into some great options overall.

No matter your budget, need for silence, or love for RGB — there’s bound to be something that you’ll appreciate. All of our recommendations can be considered among the top of their respective class.

What makes a good case fan?

When looking for the best case fans of today, we appreciate good value at affordable price points. Any case fan should be reliable for years, with competitive cooling results. Even without paying top money, you should be able to push a lot of air out of your system. Bonus points are awarded for a solid sense for style, as well.

The latter is quite divisive, however. Decking your PC out with RGB might look cool, but it does usually come at a price. There’s a monetary price at first, often followed by a slight dip in performance. That’s just the case for most RGB fans. Take that into consideration first, before starting your browsing session.

Also note that bigger fans, quite unsurprisingly, move more air. This performance usually comes at lower volumes too. As we list our top picks, we opted for 120 mm sizes, as this form factor is the most common in consumer PC cases. Many of our recommendations also come in 140 mm variants, however.

These are some of the best case fans of today

We will be listing some of the best case fans with and without RGB, for you to consider. If it’s purely silent performance you’re after, it might be best to just steer away from any RGB listings.

In addition, all of our picks are 4-pinned PWM models primarily. These can be controlled through your BIOS with ease, while also proving more effective at speeding up and slowing down accordingly. Some come with splitters for additional connections to motherboards, others prefer the use of their proprietary RGB controllers or fan hub.

The 70’s inspired aesthetic might throw you off, but any hardware enthusiast will recognize it with glee. Austria based manufacturer Noctua makes some of the best air-based cooling solutions, with the NF-A12x25 living that legacy up in case fan form. Barring the “lack” of RGB, these are easily considered one of the best case fans out there.

As is Noctua’s modus operandi, the NF-A12x25 has a solid airflow, with remarkably low noise ratios. Noctua lists their noise levels at 22.6 dBA, while usually performing way below that. Speeds range from 450 to 2000 RPM, with the latter blasting an absurd amount of air through the fan.

So yes, it is a bit pricier, but Noctua is good for the money. In addition, the fans come with many accessories, like splitter cables and rubberized dampeners. For those who don’t adore the retro aesthetic, there’s a blacked-out NF-F12 “IndustrialPPC” version too.

Lian-Li is coming in hot with their Uni line of fans. It is, quite literally, a line-up of multiple RGB fans. These models can be daisy-chained wirelessly by simply snapping them together. One singular Uni Hub can serve up to four lines, each consisting of up to four fans. For most, that’s pure overkill. On the other hand, Lian-Li offers an all-in-one solution for builds where you desire massive airflow everywhere.

The Uni Fan SL series come in 120 mm and 140 mm prices, both in either black or white. The fans can be bought seperately, while certain kits include multiple fans, as well as the Uni Hub controller. All of the options are among the highest for air cooling, but Lian-Li makes up for it in luxury.

Aside from the uniqueness of daisy-chaining, the fans are quite stellar. Although rather loud at their top speed of 1900 RPM, they will certainly cool your system. Each fan also features 32 RGB lights in their housing, which can be programmed and synchronized through the L-Connect suite from Lian-Li. With the right accessoires, you can even mount these slick looking daisy chains on liquid cooling radiators.

If you’re looking for a budget-friendly pick that still outperforms most other fans, Noctua is where it’s at. Their Redux update of the NF-S12B features some of the best price-to-performance ratios, while also serving up a sleek new, dark-grey design. Although some rotate faster, Noctua’s revised 1200 PWM model is a strong contender when it comes to lower prices.

At its top speed, the NF-S12B will only produce about 18.1 dBA of noise. Considering the solid throughput of air, most systems wouldn’t be needing to run these at top speed anyway. If you need a lot of air in a pinch, consider these the best case fans for your build.

Corsair came into the RGB hardware game early, and it shows. The LL120 RGB case fans have been on the market for some time, but they still prove popular in many RGB builds. By emphasizing both the fan blades and a ring around it, they brightly “pop” out of your system. 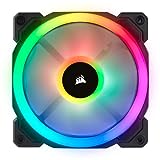 For precise control of the 16 bright LEDs, you’ll need a separate hub unit, as well as Corsair’s iCUE software. The Node Pro hub and RGB controller is sold separately, but also comes in kits with multiple LL120 fans. And well, they look pretty good, when installed as a pack.

The LL120’s aren’t exactly the loudest of RGB fans, but not dead silent either. At top speeds of 1500 RPM, these babies are easily outperformed by non-RGB competitors. When it comes to exclusively other RGB models, Corsair might be the quietest kid on our block.

NZXT is approaching RGB from another angle. Instead of lighting up the fan itself, the Aer RGB 2 range opts for lighting its housing and the internals of your PC too. It’s bright, but somehow feels more sophisticated in RGB aesthetic. 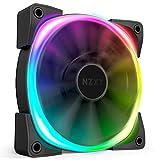 Even at lower speeds, an Aer RGB 2 will still produce quite some noise. Many cases will subdue the lower hum generated, but the noise is noticeable. Nearing the top speeds of about 1500 RPM, these fans are hard to miss. In turn, you do get something that looks especially slick. The brightness of the LEDs and their milky gradients can really brighten up your system.

Installing the units and hooking them up to their hub-like controller is quite simple. In addition, NZXT supports daisy-chaining multiple Aer RGB 2’s together. The hub can be controlled through the NZXT CAM software, although other RGB software suites might recognize the fans too.

In the market for RGB on a lower budget? Cooler Master is once again stretching out their hand. The “MasterFan” MF120 Halo is a revised version of an earlier budget contender, now with additional, addressable RGB. While renewed and decked out with lights, it still retails at affordable price points. 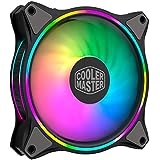 The MF120 tops out at about 1800 RPM, which will get somewhat noisy. It still performs solidly and more silently on lower speeds, though. In addition, the chassis is decked out with 24 full-color LEDs, which shine through in the fan, as well as in the halo surrounding it. The RGB might feel less sophisticated than that of pricier competitors, but these fans look the part.

Installing a MF120 is fairly simple and straight-forward, as is usual for Cooler Master. The addressable lights can be synchronized over Cooler Master’s own MasterPlus+ software, while also recognized by MSI’s Mystic Light and many other RGB suites. They’re also available with a white chassis, if you’re into that.

And with that, our recommendations on the best case fans has come to an end. We certainly hope you found a fan that really gets your air pumping, no matter your taste or budget. Some are cheaper than others, but they all have some great features going for them.