While AIO coolers are surging in popularity, air-based cooling units still prove reliable. Even though they’re far cheaper in price, they can still dissipate quite some heat from your CPU. If you want to steer clear from liquid solutions, consider our top picks on the best air-based CPU coolers.

What we look for in the best air-based CPU coolers

Not all coolers are equal. In finding the best air-based CPU coolers, we look for affordable performance and great reliability. No matter your budget, these will help your CPU stay cool in the heat of battle. Bonus points can be awarded for additional ease-of-use, lower noise ratios, and some stylish touches.

Do note that separate CPU coolers are not always a necessity. The coolers that come with certain processors usually offer enough performance to run the CPU at stock speeds. In case of later AMD Ryzen processors, the included cooler can even withstand some slight overclocking.

Our top picks will help you get higher clock speeds, and benefit overall performance. Additionally, all of our recommendations will fit the majority of popular CPU sockets, from both Intel and AMD.

If youŕe talking great CPU coolers, you’re talking Noctua. This Austrian manufacturer specializes in cooling solutions, getting traction among power-users over the last two decades. The NH-D15 is their somewhat younger flagship, that excels in high-performance scenarios, at whisper quiet volumes.

The cooling tower comes with two of Noctua’s own 140 mm fans, which are undoubtedly among the top of their class. This does render the entire solution somewhat bulkier, but it won’t block off your motherboard too much. In terms of case size, the NH-D15 won’t fit many compact builds. Noctua’s proprietary multi-socket fitting system makes installment easy though.

If Nocta’s household color scheme isn’t up to your speed, the NH-D15 also comes in a “chromax.black” edition. The RGB hype hasn’t gotten to the cooling company, but their blacked out coolers look stunning in stealthy builds.

It’s a classic, that’s for sure. Cooler Master’s Hyper 212 EVO has served more than a decade on the market, but is still beloved by gamers on a budget. If you’re looking for something quick and easy, this veteran makes a great piece of kit. It features a singular 120 mm fan and four direct-touch heat pipes, with exceptional cooling performance.

Considering its price and size in particular, this thing punches way above its weight. It won’t be much bigger than the coolers some CPUs come with.

It might not be enough for high-power CPUs, but most builds can run just fine on the Hyper 212 Evo. Especially at lower speeds, the noise is hardly noticeable. At higher speeds that might change a bit, but the fan mostly remains relatively quiet.

Cooler Master also introduced a revised edition, marked as the Cooler Master Hyper 212 EVO V2. This rerun is just as reliable and affordable, but boasts a slightly improved fan and design. Performance-wise, this should be about 10% better than the already solid entry model.

Those who want their PC to stay silent, should stick with be quiet!. It might be a bit of a cliché, but this manufacturer almost always lives up to its name. The be quiet! Pure Rock 2 underlines that, with amazing cooling performance at lower noise volumes. The included 120 mm fan only generates about 26 dBA when going all-out.

The Pure Rock 2 is quite sizable, but still fits most PC cases. In addition, the six heat pipes and cooling tower are slightly offset, to not block off any RAM modules. Installing it is rather easy, and can be done mostly from “above” the motherboard.

be quiet!’s minimalist styling might not be everybody’s cup of tea, but it goes great with stealthy builds. The blacked-out version in particular is quite the looker if you’re into less flashy designs.

If you’re into some additional RGB, Cooler Master’s got you covered. The MasterAir MA410M features two 120 mm RGB fans, and a sturdy cooling tower with integrated RGB lighting. The lighting is addressable through all types of RGB software, and can easily be set to “display” CPU temperatures through an integrated probe. 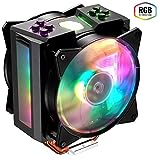 The entire tower and fans are encapsulated in a hardened shell, giving the MA410M a unique look. Don’t have the flashiness mistaken, Cooler Master still cools like no other. Considering the still affordable price, the cost-to-cooling ratio is quite good.

The only downside stems from the RGB, actually. As is usually the case, the light-up fans generate slightly more noise than their non-RGB brethren. It’s a small price to pay for having one of the best air-based CPU coolers with a bunch of colorful lighting.

Scythe’s Mugen range is one that punches above its price point. The big cooling blocks and sturdy fans of the Mugen 5 don’t cost that much, but offer great mid-range performance in a pinch. And if you want more cooling later on, you can always stick a second fan on the back. 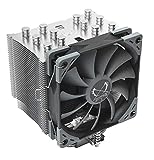 Do note that earlier versions of the Mugen 5 lacked specific accessories for certain hardware. As of the so-called Rev.B revision, the Mugen 5 is highly compatible with most sockets and motherboards. In addition, the cooler comes with cooling paste and an elongated screwdriver for easy installation.

As is the case for these chunkier solutions, the cooler is slightly offset to keep RAM modules and PCI slots accessible. There’s even a small cut-out on the back part for RAM, but a secondary fan might get cramped. It’s not great for every build. If you’re looking for better space management in roomy cases, the Scythe Mugen Max might be more up to your speed.

That’s it for our recommendations on the best air-based CPU coolers of today. We hope our list has gotten you some ideas to start browsing. And remember, there’s always something to get the air flowing the way you want.

Are you still unsure on what to look for? Hit us up in the comments down below. We’ll happily take any questions to get you finding the best air-based CPU cooler for you. This is also where we’ll take any suggestions, should you feel our article left a great addition out.